What is a rectocele?

A rectocele is a bulging of the front wall of the rectum into the back wall of the vagina. Rectoceles are usually due to thinning of the rectovaginal septum (the tissue between the rectum and vagina) and weakening of the pelvic floor muscles. This is a very common defect, however, most women do not have symptoms. There can also be other pelvic organs that bulge into the vagina, including the bladder (i.e., cystocele) and the small intestines (i.e., enterocele), leading to similar symptoms.

What can lead to developing a rectocele?

What are the symptoms associated with a rectocele?

Most people with a small rectocele do not have symptoms, and it is often only discovered during a routine physical examination. When the rectocele is large, it most commonly presents with a noticeable bulge into the vagina. Other rectal symptoms may include difficulty with evacuation during a bowel movement, the need to press against the vagina and/or space between the rectum and the vagina in order to have a bowel movement, straining with bowel movements, constipation, the urge to have multiple bowel movements throughout the day, and rectal pain. Occasionally, the stool becomes stuck in the bulge of the rectum, which is why it is difficult to have a bowel movement. Vaginal symptoms can include pain with sexual intercourse (dyspareunia), vaginal bleeding, and a sense of fullness in the vagina. 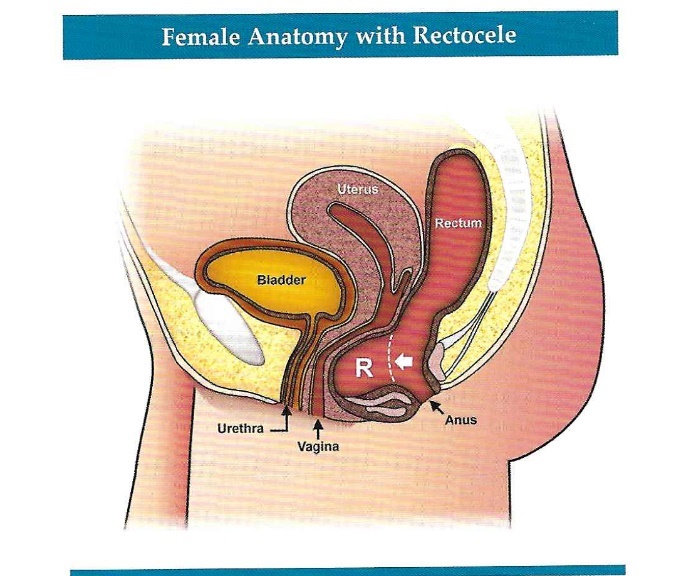 How can a rectocele be diagnosed?

A rectocele is usually found incidentally during a physical examination by your doctor. The evaluation of its severity, and potential relation to constipation symptoms, is hard to assess with physical examination alone. Further testing for a rectocele may include the use of a special X-ray study known as defecography (contrast material instilled into the rectum as an enema, followed by live X-ray imaging during a bowel movement). This study is very specific and canevaluate a rectocele's size and ability to completely empty.

How can a rectocele be treated?

Rectoceles are not treated merely for their presence, but should only be addressed when they are associated with significant symptoms that interfere with quality of life. Before any treatment, there should be a thorough evaluation by your doctor to assess whether all of the complaints can be attributed to the presence of a rectocele alone. There are both medical and surgical treatment options for rectoceles. The majority of symptoms associated with a rectocele can be resolved with medical management, however, treatment depends on the severity of symptoms.

How can a rectocele be treated with medical management only?

It is very important to have a good bowel regimen in order to avoid constipation and straining with bowel movements. A high fiber diet, consisting of 25-30 grams of fiber daily, will help with this goal. This may be achieved with a fiber supplement, high-fiber cereal, or high-fiber bars. In addition to augmenting fiber intake, increased water intake (typically 6-8 glasses daily) is also highly recommended. This will allow for softer stools that do not require significant straining with bowel movements, thereby reducing your risk for having a bulge associated with a rectocele. Other treatments may include pelvic floor exercises such as Kegel exercises (i.e., biofeedback), stool softeners, hormone replacement therapy, and avoidance of straining with bowel movements. At times, it is also helpful to apply pressure to the back of the vagina during bowel movements.

How can a rectocele be treated with surgical management?

The surgical management of rectoceles should only be considered when symptoms continue despite the use of medical management and are significant enough that they interfere with activities of daily living. There are abdominal, rectal, and vaginal surgeries that can be performed for rectoceles. The choice of procedure depends on the size of the rectocele and its associated symptoms. Most surgeries aim to remove the extra tissue that makes up the rectocele and strengthening the wall between the rectum and vagina with surrounding tissue or use of a mesh (i.e., patch). Some of the risks of surgical correction of the rectocele are bleeding, infection, and pain during intercourse (dyspareunia), as well as a risk that the rectocele may recur or worsen.

Please call our office for more information or to schedule an appointment.

Click the links below to see reviews of Dr. Schultzel through these sites: